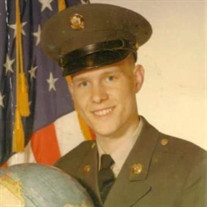 David C. Webb age 73 of Mansfield, TN, passed away April 23, 2022, at St. Thomas West Hospital in Nashville. He was born March 26, 1949, in Bruceton, TN, to the late A.C. Webb & Lennie Hollingsworth Webb. He was a self employed small engine... View Obituary & Service Information

The family of David C Webb created this Life Tributes page to make it easy to share your memories.

Send flowers to the Webb family.