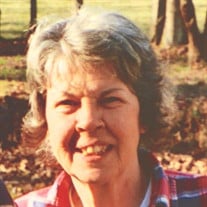 Madge Pittman Hand, 79, passed away at the Spires at Berry College in Rome, Georgia, on Monday, May 9, 2022. Prior to relocating to Rome in the fall of 2021, Madge lived for many decades in Camden, Tennessee, where she was a community volunteer and cattle farmer. Madge was born on October 24, 1942, to Martha Elizabeth McKenney Pittman and Maurice Eugene “Big Jack” Pittman, Sr., at Marietta Hospital in Cobb County, Georgia. She is preceded in death by her father and mother, her sister Maurine Pittman, and her husband of more than 40 years, Bobby Joe Hand. She is mourned by daughter Leanne (Joe) and step-granddaughter Ramsey, brother Maurice Eugene “Jack” Pittman, Jr. (Vicki), niece Paige (Mindy), cousin Jeanette (Jerry), cousin Ann, and many nieces, nephews and cousins throughout the United States. Madge graduated in 1960 from South Cobb High School in Austell. For many years she attended and was a counselor at Camp Highland for girls in Smyrna, where she taught horseback riding. After school Madge worked in her family’s business, Pittman’s Laundry & Cleaners in Austell, Mableton and Douglasville, for several decades. Though they began their married life in Austell, Madge and Bob moved to Lithia Springs, Georgia, in the early 1970s. There Madge became a leader for her daughter’s Brownie and Girl Scout troops and is remembered fondly as an enthusiastic camper. The Hands were also often found painting scenery for famed local music and theater director Carolen Hansard to support Leanne and her friends in school drama activities. In the late 1970s the Hands bought land in Camden, Tennessee, and built a home on Harmon Creek. In the 1980s Bob and Madge relocated permanently to raise cattle. For many years Bob was also the manager of the Benton County Co-op, and Madge was a community volunteer. She and her friends worked with the Benton County Animal Shelter, delivered Meals on Wheels, staffed the annual Benton County Fair, and competed to see who could give the most blood to the American Red Cross. Madge loved animals and one of her chief joys was throwing a ball for her red heeler rescue dog, Zipper. Madge and Bob were enthusiastic members of Flatwoods United Methodist Church on Flatwoods Road in Camden. Madge taught Sunday School, served on the administrative board, was a member of the United Methodist Women, and worked with the youth. Visitation will be at the church Sunday, May 15 at 2 pm. Service and burial in the adjacent church cemetery will begin at 3 pm. Plunk Funeral Home has charge of the arrangements. In lieu of flowers, the family requests that donations be made to the Benton County Animal Shelter and marked in honor of Madge Hand. Address is 915 Divider and Natchez Trace Road, Camden, TN, 38320.

Madge Pittman Hand, 79, passed away at the Spires at Berry College in Rome, Georgia, on Monday, May 9, 2022. Prior to relocating to Rome in the fall of 2021, Madge lived for many decades in Camden, Tennessee, where she was a community volunteer... View Obituary & Service Information

The family of Madge Hand created this Life Tributes page to make it easy to share your memories.

Madge Pittman Hand, 79, passed away at the Spires at Berry College...

Send flowers to the Hand family.