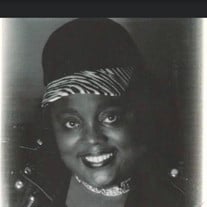 Funeral Services for Mona Boggs-Bennett age 57 of Paris, TN, will be held Friday, March 11, 2022, 1:00pm at Plunk Funeral Home with Bro. Fitz Bailey officiating. Wake will be Friday from 11am until 12:30pm with service starting at 1pm. Burial... View Obituary & Service Information

The family of Mona Jeannette Boggs-Bennett created this Life Tributes page to make it easy to share your memories.

Send flowers to the Boggs-Bennett family.