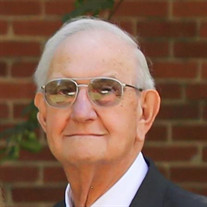 William Thomas Patterson, 78, of Camden, TN, passed away peacefully at his home on Monday, January 2, 2017. Funeral Services are scheduled at Plunk Funeral Home on Wednesday, January 4, 2017, with Rev. Rebecca Luter and Rev. Kevin Conrad officiating. Burial will follow in Benton Memory Gardens. Mr. Patterson was born April 5, 1938, in Camden to the late Leslie and Kate Patterson. He graduated from Camden Central High in 1957 where he was an all-conference football player. He went on to graduate from John A. Gupton School of Mortuary Science in 1958. W.T. married Sammie (Ingram) Patterson on June 21, 1959. The couple was blessed with two daughters: Karla Wyatt and her husband Ken of Lebanon, TN, and Kathy Conrad and her husband Kevin of Milan, TN. The joy of his life was his two grandchildren, Joshua (Arwyn) Wyatt and April (Travis) Stacy all of Hendersonville, TN. He also cherished his step-grandchildren: Daniel and Chelsea Conrad. Mr. Patterson served as a funeral director in Trenton and Dickson, TN, before becoming partners with Gordon Wheatley as owners/operators of Stockdale-Malin Funeral Home in Camden and Big Sandy, TN. He was awarded the Fifty Year Service Award from the Tennessee funeral Directors Association along with the Legacy Award and a Lifetime Achievement Award. He served as a Director beginning in 1981, Secretary-Treasurer in 1982, Vice-President in 1983, and President in 1984. He also served on the State Board of Funeral Directors and Embalmers from 2011 until 2015 and as a Vice-President in 2013. W.T. was a charter member of the Benton County Rescue Squad, served as Benton County Coroner, was a director for the Bank of Camden from 1990 until 2008 and Franklin American Insurance, and a member of the Camden Masonic Lodge # 179 and 32nd Degree Scottish Rite Mason. W.T. loved his community and served in various other ways as often as he could. Mr. Patterson was a long time member of the First United Methodist Church of Camden where he served on various committees including the Building committee for the new sanctuary, Trustees, and Pastor-Staff Relations committee. Mr. Patterson spent cherished time with his brothers and sisters: George W. (Mae) Patterson and Myrna (Larry) Pickler of Camden, TN; Harley (Susan) Patterson of Ripley, TN; Cooper (Kay) Patterson of Germantown, TN; Brenda (George) Deaton and Linda (Kenny) Dowdy of Big Sandy, TN: and Steve (Lindsey) Patterson of Jackson, TN. Memorials may be directed to Camden First United Methodist Church PO Box 277 Camden, TN 38320, Lakeshore United Methodist Assembly 1458 Pilot Knob Road Eva, TN 38333, Second Harvest Food Bank PO Box 7 Camden, TN 38320, or American Cancer Society.

The family of William Thomas "W.T." Patterson created this Life Tributes page to make it easy to share your memories.

Send flowers to the Patterson family.